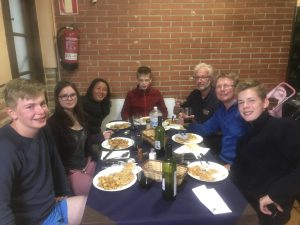 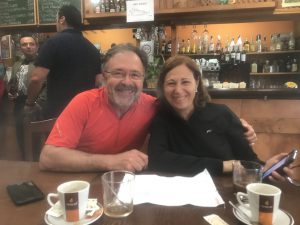 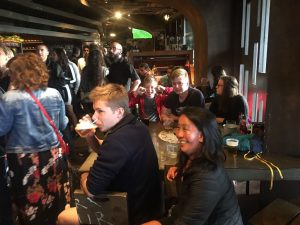 Waking up in the tiny albergue and getting up at 5, have breakfast – including musli and starting walking already at 6am I had a good start on the day. And after a while I came to a cafe where I met Volker whom I had bumped into a few times. He was walking with Gregor who had his sons with him: Jan Erik 19 year, Lasse 16 years and Ole 14 years, and Jan Erik’s girlfriend as Svenja. Lasse and Ole was named after Astrid Lindgren’s book, believe it is “Alle vor børn i Bulderby”… or something like that.

I walked with the little group and we had so much fun. The young ones listened to music and we danced while we were walking and talked a lot. Even made a little bit of yoga. We had the traditional pilgrim menu at night and a some good night beers.
The following day Volker took the bus in the direction of Santiago, to be able to arrive in Santiago on June 1st his birthday. Gregor and the young ones took the bus to Gijon.

Walking from Villaviciosa, I met Jesus and Maria! And it was truly an incredible experience. I saw them by a local beverage sale, and then later under a bridge, and don’t even remember what I said or why, but anyway something about following them. They didn’t speak a lot of English, but we managed to communicate. They were only walking in the weekend, guess little free time from work and children – well adult children from 19 and up, they had three: Jesus, Pablo and someone with a Basque name, which I didn’t really get.

And they helped me so much. What I didn’t realise was that this distance was a little tough with a lot of descent – 320 m in 2 km. But they dragged and pushed up the hill, one walking in front of me and one walking after me. They were so kind and Maria even held her umbrella over me too, but I had to tell her that it wasn’t necessary. Anyway it was an amazing encounter. When we got to Gijon, they didn’t want to walk and they took the bus. We said our goodbyes, and I feel very lucky to meet these two people just there!

In the evening I met Gregor and the kids in a bar for the champion’s league final. We had cider, beers and tapas, and I really enjoyed the company.
Gregor, Lasse and Ole walked me to the hotel, and we said our goodbyes as the were going home the following day.
I slept late, had breakfast and started walking very late. And walking in the street someone is shouting my name and Lasse, Ole and Gregor is running out to give me a last “buen Camino” and I promised to send a photo when I arrive in Santiago de Compostela, which now isn’t that far away.

The plan was to have a short day today – but there wasn’t any accommodation, so I had to walk to the nearest which was about 25 km. The way was quite boring, and for some reason I felt tired. The last 10 km I listened to music, which kept the spirit and the speed up.

And now I will be sleeping in my first big room. I believe we are 80 in one room and the bunks bed a in pairs… I hung a blanket, so I will no be spooning the unknown stranger next to me. I also want to a restaurant with a group of pilgrims, but it was so noisy and I was too tired to listed to gossip about other pilgrims, so I left to have dinner on my own. A good choice…